form is not a convention, it’s a quest

Rising is a survival game in faux 8bit pixel art which will ultimately comprise multiple episodes, each one being autonomous and depicting a unique story, through the game, a la Another World (Eric Chahi). Set in nature, inspired by various trips in Brazil, Africa, India, France, Japan or Turkey, each episode will tell the quest for life of a living form on earth or beyond.

Rising deals with the issue of economy. The episodic format involves selection of elements in order to keep it short. Choosing at the same time what to keep, and what to be rid of. Even though the length of each episode is variable, the point is to keep things close enough to the message and eventually to the truth. It is by choosing the right elements and removing the unnecessary ones that the game manages to keep things interesting and focused.

The form of the game, as autonomous episodes, is not only a mere representation of the developers (EV) own aesthetic or dedication to videogame rules. The structure itself assumes the sacrifice of the traditional representation of time and space in a videogame, and somehow is in accordance with the message of the game. Hence the disharmony created by the dislocation of usual storytelling patterns is to be counterbalanced by the harmony between the message of the game and its own form. Therefore, because each episode will possess a singular message, each structure should also possess its own dedicated form. As a result, the form of every Rising episodes is always changing, and fits the message of the game rather than conventions. “form is not a convention, it’s a quest”.

Each episode is a part of a mosaic of conflicting voices who will eventually rise together at the end. Rising multiplies narrative figures in order to multiply points of view, and hence, to be closer to the truth. You can play any of these autonomous episodes at the pace and order you want. Or you can play only one episode. As one single moment can gather together all voices: it is the moment of truth, i.e. the epiphany. In other words, one episode is one truth which has the power to gather together all the fragmented parts of the game. Rising is multidimensional. 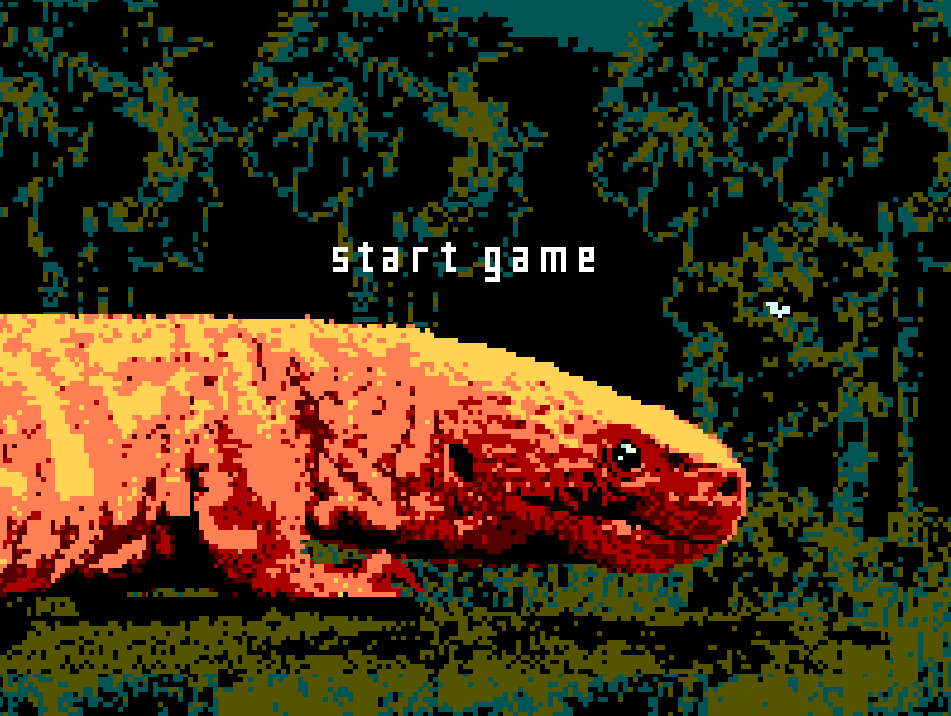 In episode #1 you play a lizard aiming to survive in a dangerous natural world. He can eat butterflies and worms but has to prevent parrots’ attacks. As a lizard, he can hide, stop his movements and choose to eat his prey at the most precise moment. A satiety bar forces him to consistently eat preys. You only use the directional pad of the keyboard to navigate through the map, but the physic is precise and the lizard can move freely and stick on walls or trees to find the ideal path for his quest. He can also jump. It’s a cruel world and each action has to be chosen within the right moment of significance. Each action becomes a moment of revelation, ephemeral, dedicated entirely to sacrificing the flux of time for the right moment. To sacrifice life in order to die at the right time and hence, to live at the right time. Rising does not expire with death, death begins before death, and life goes on after life, and the fascinating canvas you see when you die are among the best and most passionate sequences of the game. Hence, Rising consciously evokes the presence by the absence, with its pixel art graphics and sound design elegantly blended into a Zen, minimal and spatial floating world, with the screaming of butterflies which reminds us of something else and which becomes the object of the fascination as if they only started to exist once death happened. The sound of the butterflies’ screaming now starts to overtake the whole playthrough. Our mind is now filled with hundreds of pictures, hundreds of memories and recollections, to the point that we can neither forget it nor move on to something else.

Rising is an arcade game and must be played as such. You can play Rising slowly, and actually make a better score in staying in the first zone. You can optimize each movement. It’s not an endless game like Canabalt, but the run and die concept shares the same aspirations. You don’t need to see the ending even though the game has a beautiful one. The concept is to continue playing, short or long runs, few or many points, the beauty is there nonetheless. You will eventually die. You can restart the game or let it run for itself and take a breath, enjoy the graphics, the music, the physic, because it runs for itself marvelously.

rising is a Haiku

“Life consists of rare, isolated moments of the greatest significance, and of innumerably many intervals, during which at best the silhouettes of those moments hover about us.”
– Nietzsche, The hour-hand of life.

The core of Rising’s episodes is the epiphany. Each episode depicts an isolated moment of revelation in one character’s life. The attention to detail is important enough to convey the soul and the meaning of a situation. For instance, the graphical and musical representation in the game of natural elements such as mountains, waterfalls, trees, parrots, etc… is deep enough to speak to the heart like if it were the first time one sees them. Thus, to recreate the original feeling one experienced in front of things, each time you start or restart the game. There is a voluntary selection of what to depict and what not to. For instance, sounds do not necessarily express the usual perception of the action (the rotating birds’ songs are made with a korg MS-20, which may sound unnatural), or you may discover what it means later on.

If Rising were to use situations and elements in a traditional fashion, it would lead them only to their uniformity and uselessness, hence to their dwindling disappearance. Contextualization is not necessary either. What is essential, therefore, is the isolated moment and not what comes before and after. What matters is the moment. Truth lies in one single moment. 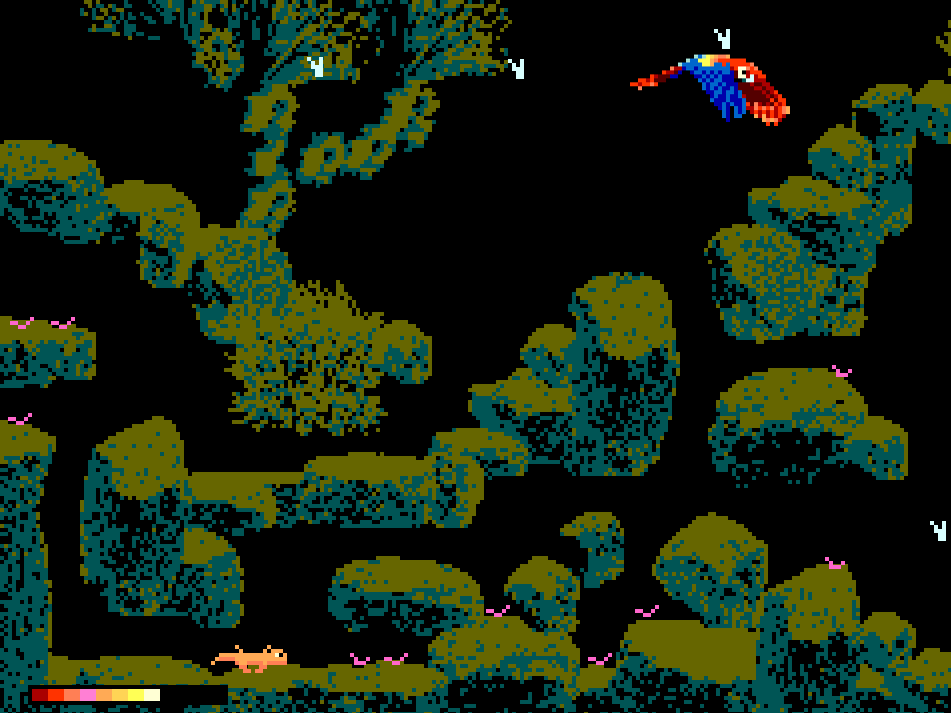 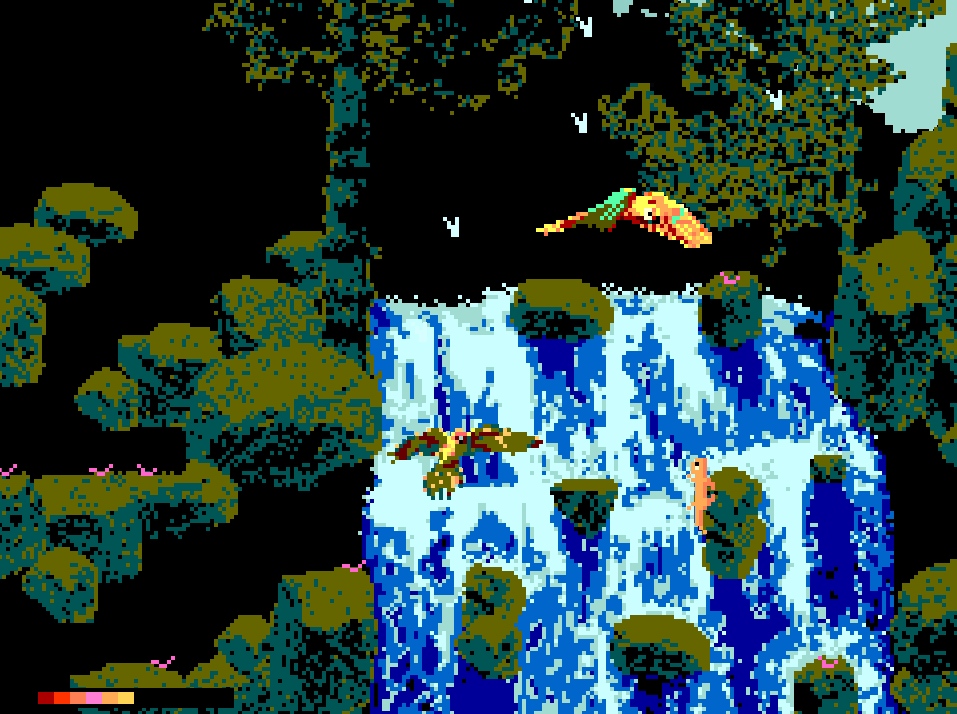 There is a waterfall in the mid map of Hungry Lizard. A turning point. The in-game representation of the waterfall uses a palette of color unique for it, and a piece of music unique for it altogether. The waterfall produces no usual sound of blowing or water falling. The waterfall recovers its original enigma, and delivers all kind of feelings from its in-game representation as it is also the hardest part of the game.  But what matters is not the nature of the feelings, not the beautifulness or the ugliness of the experience. For in every spectacle there is the immanence of the catastrophe. From there comes its enigma, and its fascinating appeal. The waterfall organizes the flow of the music and graphics, as it organizes the flow of nature, seasons and life. And, altogether, the flow of the game. When seen from a new perspective, the banality of the waterfall becomes fascinating. Truth regularly appears plain and simple, boring to the ordinary person but fascinating to the experienced one. Everything in Rising is arranged to form a pattern, its structure being so adjusted, that it seems to us radiant. The perfect adjustment of the décor, made of one scroll as in traditional Chinese paintings and printed in a single line in the form of a Haiku, brings back an emotional value and a deep fascination as it is a work of art in itself.

However, in order to go so deeply into the meaning of things and to give access of some kind of knowledge, one has to stop the flux of time in order to enable the meaning of the experience to crystallize. That’s why you die so frequently in Hungry Lizard. Each death is different and demands a moment of recollection and contemplation. Time is therefore dedicated to seeing and experiencing.

Rising is a violent game. The player will experience this soon enough. The value created is much more intense in violent loss. 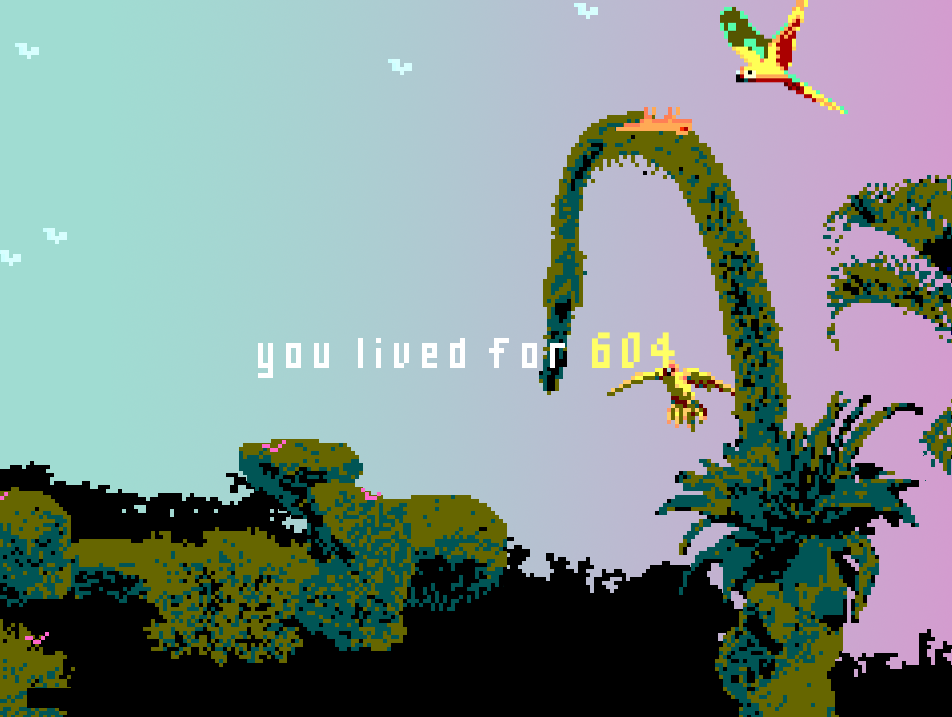 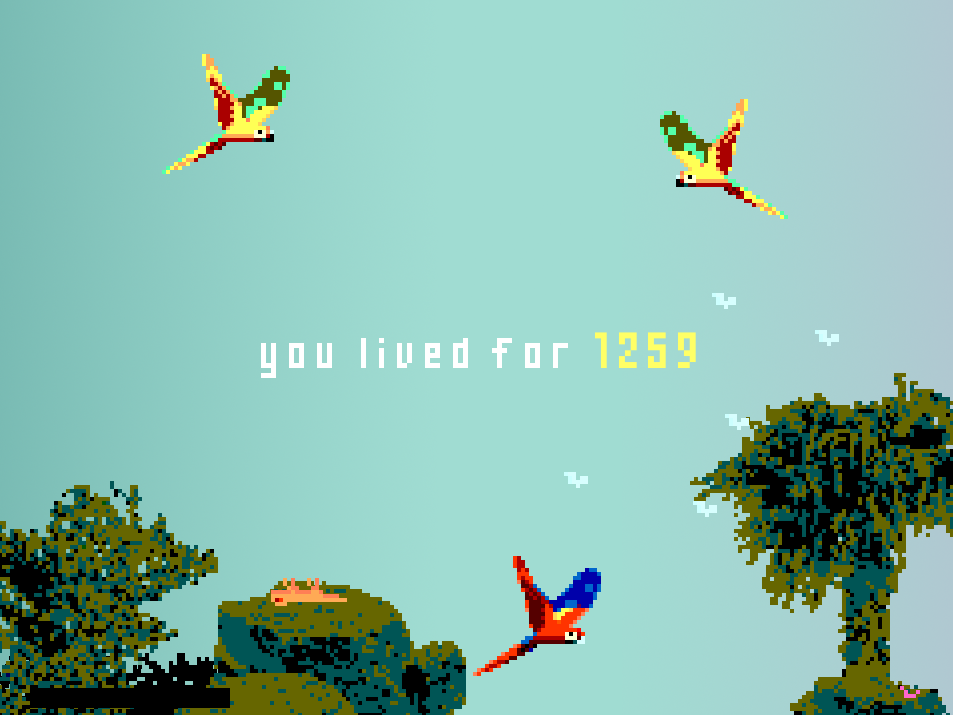 Rising’s claim is that everything, every little detail is to be seen in a new perspective. In Rising’s episodes, elements are not limited to their appearances, their aesthetics, their designations or their use-value anymore. For instance, a waterfall is not only an element where one jump, but becomes the triggering factor of the revelation.  Each element of the game, therefore, becomes able to evoke a truth once forgotten. In Rising, it feels like we are seeing the world for the first time. Everything is so beautiful all at once. From so many angles.